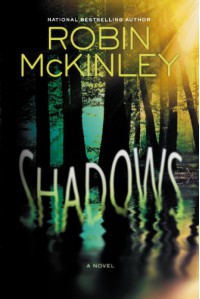 "Shadows" is McKinley channelling Diana Wynne Jones, a fact which is foregrounded by the book's dedication.  The focus on family, the combination of a magical and a technological world, and the cascading chaos of the story's climax all bring Jones' work strongly to mind.

The thrust of the story is dystopian - while it starts out seeming to be about a problematic step-father, it segues into a focus on the society (although this relies a little on the protagonist having paid very little attention to that society and tuning out in school a great deal).

I started out slow with the book, but settled into it around a third of the way in, when the action picked up, and stayed up way too late reading it.  An enjoyable read (though a little overwhelming, with a great deal of teen-speak, alt-world slang, Japanese and "Old World" terms spilling over the pages).